Log in Register
Home
You are using an out of date browser. It may not display this or other websites correctly.
You should upgrade or use an alternative browser.

Speaking on Talk Radio this morning, Oxford University epidemiologist Carl Heneghan said that there is no evidence that face masks help to keep pupils and teachers safe in the classroom. 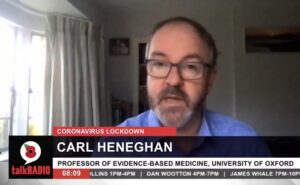 “What I would say to people is, in the absence of evidence, if you think they should be wearing them, go and talk to some children. That’s what I’ve done. And I’ve said, what’s the reality on the ground? What’s it like for you in class? How does it feel?


And I can tell you they hate them. They find it really difficult. They don’t adhere to the guidelines. So for instance at the end of class they go into their pocket. They pull them out. That’s a dangerous issue with co-infections and the potential of that to stay infected for a period of time.”


Heneghan went on to say that medical interventions must be backed by hard evidence that the intervention will work. He said;


“That’s all I ever do is say, where’s the evidence to inform what we do and if it’s lacking, you have to come down on the side of not intervening.


Now one of the key problems we’ve got when we intervene, is it becomes incredibly difficult to roll back interventions. And that’s what we are saying. That’s the great problem now, the just in-case approach. That’s not how to perform in healthcare.”


Professor of Epidemiology Carl Heneghan tells Julia there is "no evidence" face masks keep pupils and teachers safe in the classroom:
“Talk to children and ask them what it’s like to wear masks in school. They hate them and find them really difficult”@JuliaHB1 | @carlheneghan pic.twitter.com/31KTJzpKUA
— talkRADIO (@talkRADIO) April 26, 2021
Click to expand...

Masks have nothing to do with stopping the spread of any coronavirus.
It's the Nazi's method of controlling the brainwashed.


In its apology, the college said booking the event 'was a serious failure that has caused significant distress' to students who discovered a leaflet from the event when they returned to the college after summer.